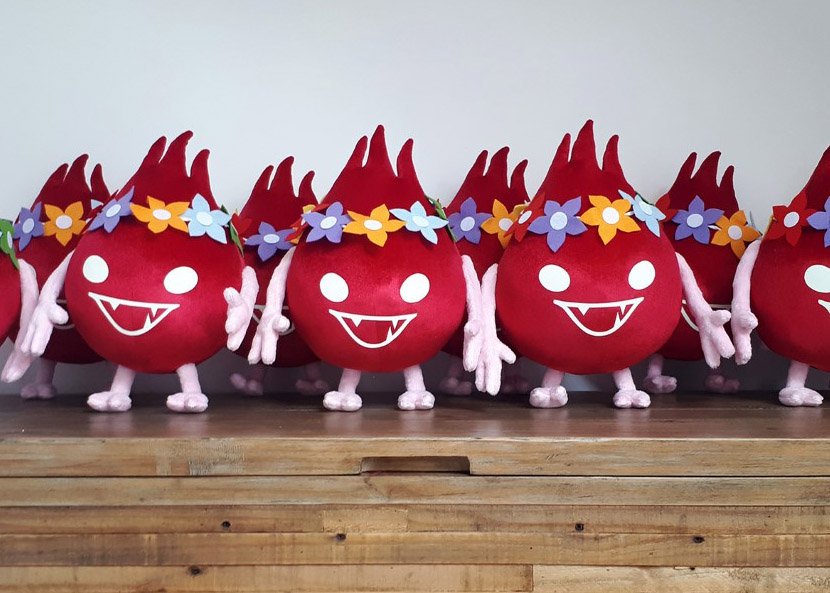 If you own a PS4 and haven’t taken a look at the award-winning Concrete Genie, I strongly recommend you do. The game is a joy to play and the art style is beautiful. I was asked to make plushies based closely on designs provided by the game art team for either a small production run or just to have around the office.

There were a lot of first for me here. I got a sewing machine just for this project and will never look back – everything before now was done completely by hand and took forever. I made my first human plush when doing Ash and now I feel more confident in trying a human creation of my own. At one point I was making ten of a plush in a short timeframe. I’m sure for a lot of plushie makers this is nothing – but I’ve never made more than two of anything at once so this was a big deal for me.

I also used a lot of materials I wasn’t used to. I’ve used pretty much exclusively minky and fur in the past. I got to work with cotton, linen, knitted cloth, making items out of felt that don’t look awful at the seams (I bloody hate felt) as well as transfer paper for detailed designs and crisp glow in the dark faces. I also went straight into fussy stitches on the sewing machine: satin stitches with two types of stabiliser. There were a lot of machine jams and remaking faces during the whole process. It didn’t help that the glow-in-the-dark thread used for the detail was weird and plasticy so didn’t cover well. I think I’ve got the hang of it now.

I also dyed my own minky for the purple genie which was a minor disaster – toxic powder everywhere, a good cooking pot ruined and a purple patch on the lawn. But good luck finding that shade of purple minky in the UK – I certainly couldn’t.

Below are some images of the plushies that were made over several months: